When To Use Pie Charts in Dashboards: In Defense of the Pie Chart

Perhaps you didn’t think the humble pie chart needed defending. Maybe you remember it fondly as the tool that taught you fractions back in elementary school, helped you segment hours into minutes, dollars into cents. Although it may be in curricula and conference rooms, the pie chart has been under fire by data scholars and mathematicians for quite some time now. Edward Tufte, a pioneer in the field of data visualization and data design, maintains that pie charts “should never be used,” 1 and IT consultant Stephen Few calls it “by far the least effective” graph intended to facilitate quantitative communication.2 And yet, we support pie charts.

Few’s diatribe against pie charts actually opens with a reference to the BI industry:

Not long ago I received an email from a colleague who keeps watch on business intelligence vendors and rates their products. She was puzzled that a particular product that I happen to like did not support pie charts…. […] Could this vendor’s omission of pie charts be intentional and justified? I explained that this was indeed the case, and praised the vendor’s design team for their good sense. (emphasis mine)

It is in the face of this assertion that BI platforms supporting pie charts fail to exercise good design sense–and in observance of Pi Day, holiest of nerd holidays–that we defend our choice to support the pie chart despite its well-documented shortcomings.

First, let us concede to Few and his cohort the point that unlabeled pie charts are poor tools for conveying precise metrics. Take the example below: without the labels, it would require real mental exertion to even approximate the area percentage of each slice, and unless the labels include the category values, you have to glance back and forth between chart and legend to get the full picture. 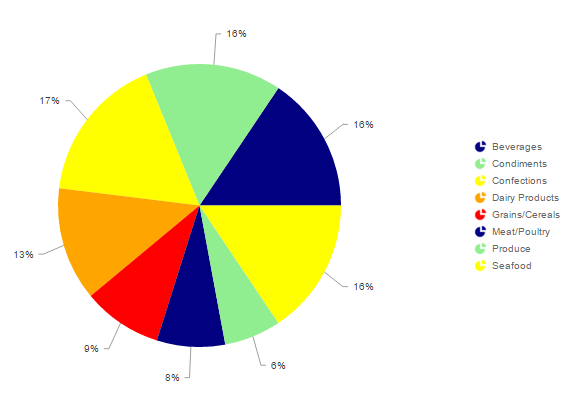 According to Few, a chart that requires this much labeling might as well be a table for all the work it does to show meaningful relationships between values. If it’s significant to the rhetorical situation that readers of the chart should be able to see that the red wedge is one percentage point larger than the blue wedge next to it, then indeed the pie chart is the wrong tool for the job.

The array above does bolster Tufte’s claim that “the only thing worse than a pie chart is several of them, for then the viewer is asked to compare quantities located in spatial disarray both within and between pies,” 4 which can be a tall order for even the most observant among us. Is the light blue slice above growing or diminishing over time? Hard to say, but a table would reveal that the answer is neither; it remains constant.

Lastly, fancified pie charts pose problems of their own. Three-dimensional pie charts require tilting, which exaggerates the foreground and de-emphasizes the background, making it harder to read slice area. Some BI tools even support special surface effects like gradients and gloss, which, depending on execution, can add another layer of confusion.

But even Few admits that there’s one thing the pie chart does better than any other visualization, and that is convey the part-to-whole relationship. While bar charts do show the hierarchical relationship between values better than pies do, they make the viewer work to picture the whole. Bruce Gabrielle’s5 comparison below says it best.

First, looking at the bar chart, it’s unclear at a glance that together the bars add up to 100%. Coming to this conclusion would require good approximation skills and mental arithmetic. The pie chart, on the other hand, clearly shows that companies B and C are dominating the market, with Company B controlling more than companies F, E, A, and D combined. The only value of interest in this case is the 65%, which is conveyed in the chart title; the pie isn’t telling a story about Company A, and so its precise value needn’t be conveyed. If this visualization’s intended message were, rather, that Company A controls more of the market than Company E, then a pie chart would be a poor tool for the purpose, since those slices are so similar in size.

Gabrielle also cites people’s affinity for rounded edges as a reason to use the pie chart, but basing the virtues of a data visualization on the shifting sands of popular preference seems risky to us, so we’re going to stick with the utilitarian reasons for supporting the pie chart. Still,  Apple continues to capitalize on this love of roundness, so let’s not completely ignore the pie chart’s ability to add diversity of shape to BI dashboards. 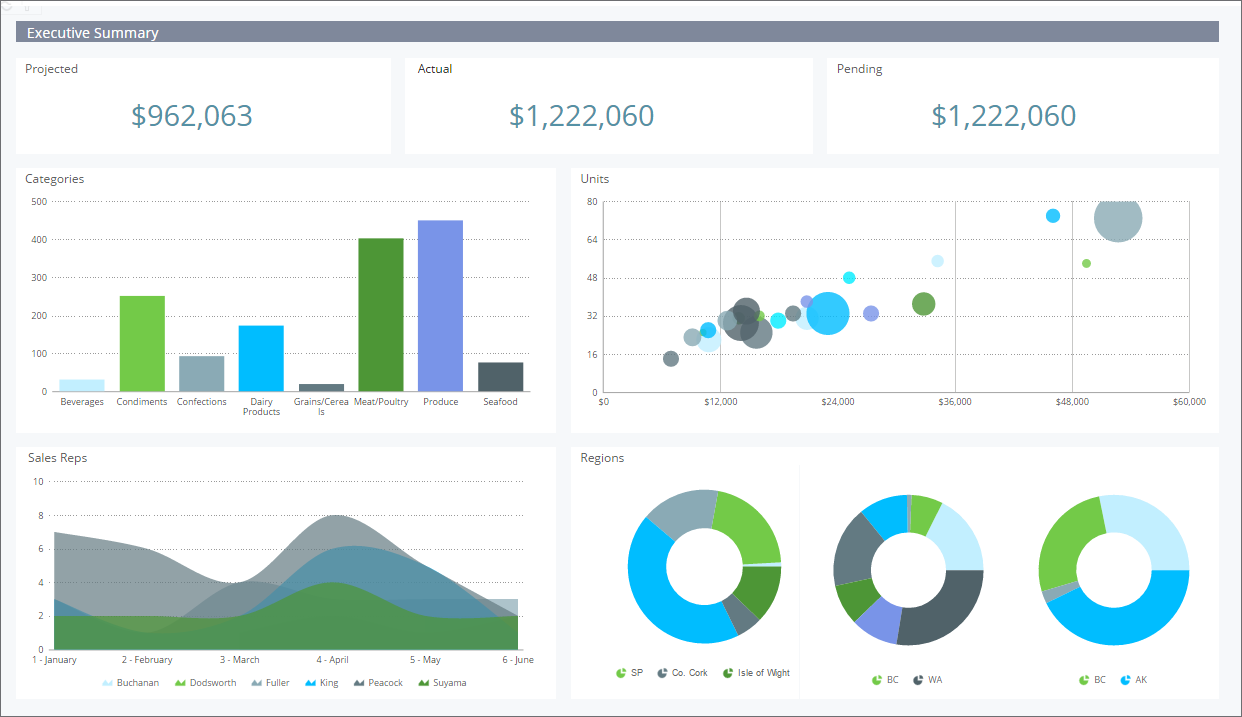 In the end, we at Exago believe that a pie chart is like any other tool in that it can be used well or used poorly. As long as it’s good for something, we feel it deserves a spot in our toolbox. Then it’s up to our end users to decide when and how to use it. Where pie charts are concerned, we rely on the guidelines below.

Create a pie chart only if:

That’s it! Three simple rules, and even if your Pi Day celebrations get a little out of hand, you’ll have the tools you need to chart responsibly.

For SaaS businesses looking for embedded BI solutions, Exago supports providers and their users by making it easy for business professionals to access and manipulate their data, no matter their technical qualifications. Exago BI integrates seamlessly with web-based SaaS applications to bring ad hoc reporting and analytics to any multi-tenant environment. Our dedication to customizable integration allows us to prioritize usability without compromising on power. Contact us today for more information.

A Recipe for Great Pie (Charts)