What is Flex UX?

Flex UX describes digital environments that support a dynamic user experience. We coined the term because industry bromides like “user friendly” just weren’t cutting it, and “highly customizable, configurable, and extensible while accommodating users at varying levels of technical ability as they advance over time” doesn’t exactly roll off the tongue. It became clear that in order to talk about an essential tenet of our approach to application design, we’d have to figure out what to call it.

User experience (UX) is a relatively young concept that has evolved considerably since its inception twenty years ago. Don Norman, co-founder and consultant with the Nielsen Norman Group, invented the term during his time at Apple in the mid-1990s. There, he and his team set up the User Experience Architects office for the purposes of improving “all aspects of the end-user’s interaction with the company, its services, and its products.” This concept has since spun off into a whole cluster of new design concentrations, including Interaction Design (IxD), Experience Design (XD), Customer Experience (CX), and User Interface (UI) Design.

For the purposes of our term, however, we’ll be referring to Silicon Valley veteran and UX expert (u-expert?) Pabini Gabriel-Petit’s definition:

[User experience] comprehends all aspects of digital products and services that users experience directly—and perceive, learn, and use—including products’ form, behavior, and content, but also encompassing users’ broader brand experience and the response that experience evokes in them. Key factors contributing to the quality of users’ experience of products are learnability, usability, usefulness, and aesthetic appeal. (Emphasis mine.)

And so, flex UX is the ability to make a digital environment’s form, behavior, and content flexible (or, if you like, dynamic) such that end users have access to a spectrum of experiences.

Exago utilizes the flex UX approach because we believe our clients — the SaaS companies integrating BI into their applications — know their products, industries, and end users better than we do.

“Software companies everywhere are chasing this elusive thing called ease-of-use,” explains Exago VP Marketing Suzanne Ryan, “but when it comes to analytics, what’s easy for one person could be either very limiting or completely overwhelming for someone else. So we give administrators and users the control they need to tailor their own experiences.”

Exago BI comes with a user interface, but SaaS companies can expose as much or as little of it as they like. Some adopt the entire UI, embedding it directly into the application all in one piece. Others take advantage of our open CSS and make changes to the style, replacing default colors with brand colors. Still others break up the UI into segments and design the controls used to access them. A handful just expose report output and omit the UI altogether!

Softerware, for example, felt its non-technical end users needed a more streamlined dashboard designer than Exago offers out of the box. Using the application’s CSS and open API, they stripped away the toolbar, divorced the Toolbox from the Data Fields pane, and recolored the dashboard canvas for their nonprofit donor management solution, DonorPerfect. 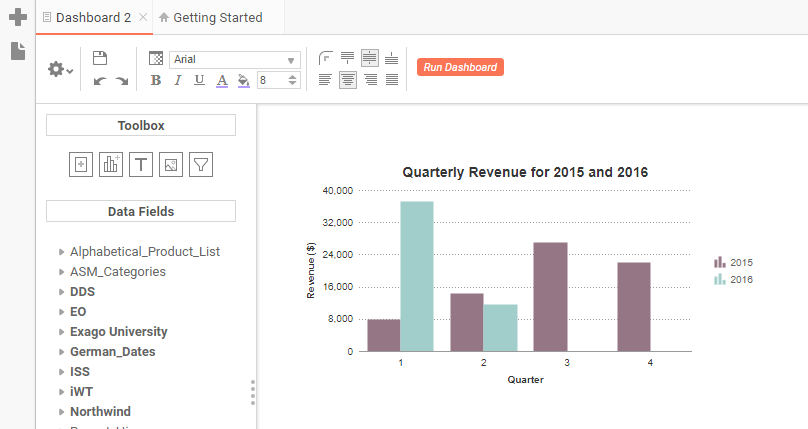 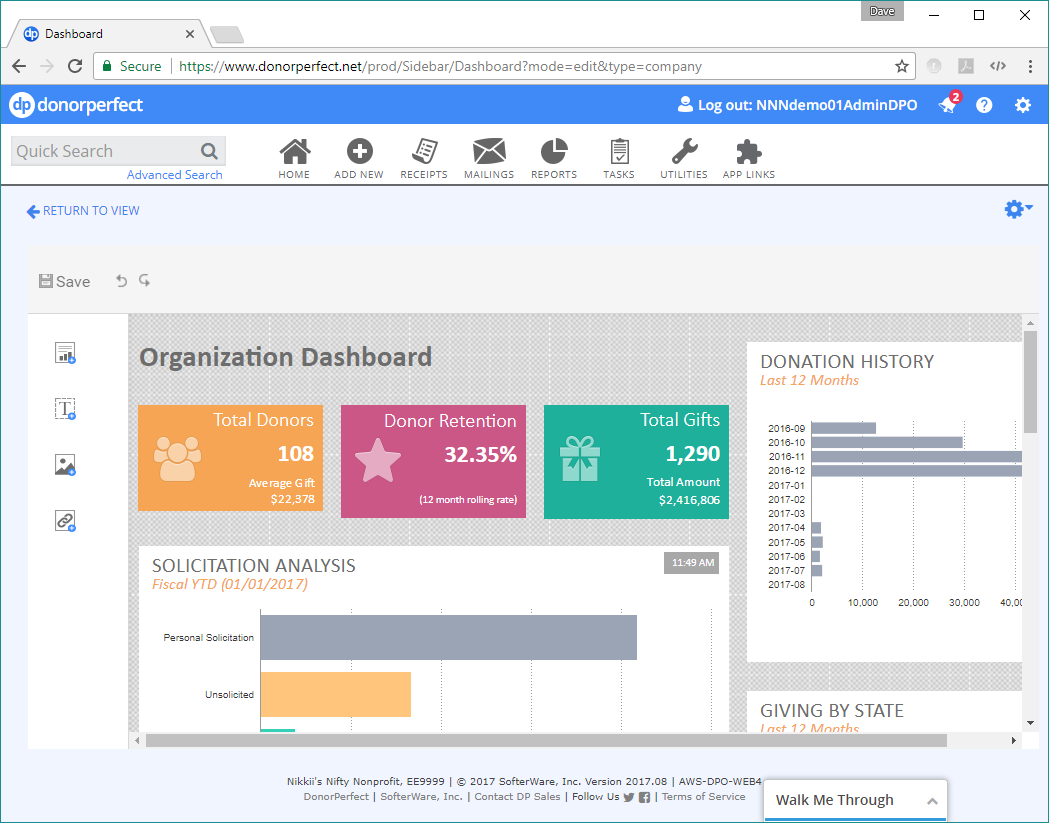 At the micro level, Exago also gives admins the ability to show or hide features based on a user’s login credentials. Maybe you don’t want non-managers to be able to edit certain reports, or perhaps you want to protect non-technical end users from the complexities of Exago’s Advanced Report designer until such time as they’ve attended a training program. Conversely, you may want to create a no-holds-barred environment so power users can dive in on day one. Exago lets admins make these determinations instead of shoehorning end users into ill-fitting digital environments.

Applications with a less diverse user base—for example, one made up mostly of technical power users—can err on the side of more power. Because Exago BI is designed for integration with SaaS applications of all creeds, it needs to accommodate users from across the spectrum.
When designing the application, Exago’s Product Innovation Team assumes that the majority of the application’s end users fall here on the spectrum:

Its defaults, therefore, favor less technical users. But more advanced users are not limited to these defaults and can be given permission to access more powerful features.
Exago’s data frameworks are a terrific example of this principle in application. Instead of requiring non-technical end users to know what data models are and either select from a library of predefined data models or build one from scratch when starting a report, Exago’s data framework algorithm uses admin settings to infer the correct data model based on the user’s actions.
“Our goal is to have the default satisfy 98% of use cases,” explains Exago CTO Stewart Meyers. In the remaining 2% of cases, credentialed users can create custom data models for themselves using the Advanced Joins Menu.”

In the design world, a desire path is the course a user takes in navigating an environment. Sometimes users follow the signs and workflows created for them, and sometimes they don’t. The desire path concept is most famously illustrated through photos of actual walkways through parks and other public spaces. If enough pedestrians leave paved walkways to cut across the grass, a literal preferred path begins to form. 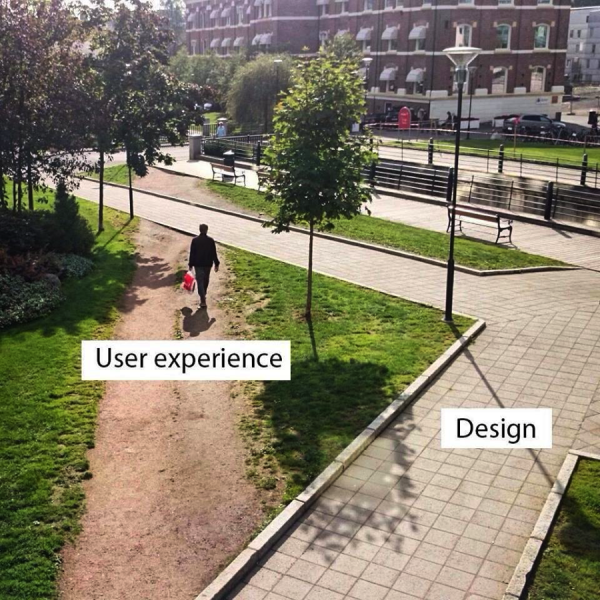 Exago’s product innovation team recognizes that what feels intuitive to one user might not feel intuitive to another, so it builds in multiple means of getting to the same result.

There are three ways to add a field to an ExpressView report, for example. You can drag-and-drop the field onto the canvas, click the Add arrow, or double click the field. Instead of giving users just one way to accomplish this task, we give them three so they can pick the one that feels most natural to them in the moment. Two of the three methods require no buttons or controls, allowing Exago to foster desire paths without causing visual clutter.Ultimately, flex UX is about responding to change and accounting for diversity. A flex UX application can accommodate:

All this is practiced with the intent of creating positive and sustainable relationships between the application, its host company, and that company’s customers.
If you’ve spotted other examples of flex UX in the wild, tell us about it in the comments!

On Accessibility, Diversity, and Inclusion in Design

UX Files: The Case of the "Add Tile" Button

UX Files: The Case of the Indescribable Variables